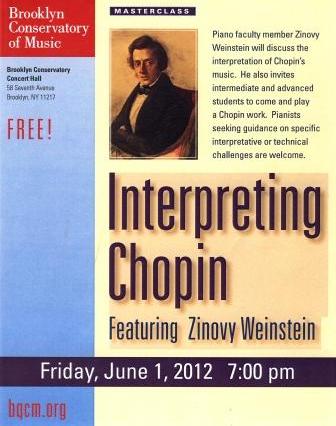 I have known Zinovy Weinstein since 1977, when I was a beginning piano student at the Music School for gifted students in my native city Orel in Russia. Although several years have passed since I studied with Mr. Weinstein, my opinion of him as a talented and inspiring teacher has remained unchanged.
As a teacher, Mr. Weinstein possesses many unique qualities. He works equally well with students of all levels and abilities. One of the strongest aspects of his teaching is his ability to simplify and break down very difficult piano passages and convey to students different methods of mastering them. Mr. Weinstein’s expertise and knowledge also allow him to explain important stylistic nuances of the most difficult piano compositions.
His intelligence, professionalism, kindness, and deep appreciation of music are readily observable and are reflected in his interactions with students.

I came to Mr. Weinstein with a sporadic history of music education spanning over 20 years, although I didn't start seriously studying piano until I was 19. I arrived with decent technical skills, a broad but limited performance repertoire, and a deep love and knowledge of classical music and history, but with many holes in my technique.
Mr. Weinstein helped me to really hone my playing, focusing on more advanced concepts like touch and voicing and always emphasizing sound above all else. I'll remember him for teaching me two great, contrasting works of the twentieth century: Gershwin's Rhapsody in Blue and Rachmaninoff's Sonata in B-flat minor.
Growing up I never thought I'd be able to play works of this magnitude and I'm very grateful to Mr. Weinstein for believing in me.

I have known Zinovy Weinstein as a friend and as a musical colleague on the faculty of the Brooklyn Conservatory of Music for many years.
Zinovy is a wonderful pianist and teacher trained in the Russian School. As a performer, he is exciting yet controlled. His playing is very sensitive and exhibits a profound understanding of the music.
The insight Zinovy has into each piece he studies or teaches is always fresh no matter how many times he has played or taught the piece. His passion for the music is evident in his approach; it is exacting, precise and true to the composer’s wishes.
As a teacher, Zinovy is wonderful. He has great patience while demanding a high level from each student. He knows how to bring out the best in anyone fortunate to be in his studio.

I was almost 70 years old when I started my lessons with Zinovy. I had not played the piano for almost 30 years, so I was rusty to say the least. It was not like riding a bicycle.
I had inherited my grand piano from my father who was a very good player. He was very critical of me for not achieving his high standards, so I developed a complex and gave up.
A few years ago my wife pointed out that the piano was taking up a lot of space in our living room. She suggested that maybe it was time to sell it ….. unless of course I was prepared to start playing again. I decided to rise to the challenge.
Zinovy was very patient with me when I explained my situation to him. We started out with simple exercises and a few easy pieces. We also started playing duets at the end of each lesson, which was always great fun.
Today Zinovy describes me as being halfway between an intermediate and advanced pupil. I give him much of the credit. He is still patient with me, gently corrects my errors and shows me how to cope with the difficult parts. I practice most days between our lessons as I want to continue to improve and also to please my great teacher. I am very grateful for his inspiration.

Although I started playing the piano at five, I took formal lessons for only a few years before I gave it up. I continued to play “on and off” over the years. In my first lesson with Zinovy, he immediately replaced the little Haydn sonata I had brought with a Chopin Polonaise. I did not think I could play it, but to my astonishment, and with his help, I did. This pattern has continued over the years. With Zinovy’s help, I have been able to play pieces, that in my wildest dreams, I never thought I could, including: Liszt, St Paul Walking On The Waves (Legend #2); Chopin Ballade #3 in A Flat Major, and Fantasie Impromptu, Op. 66, C# Minor; and Prokofiev, Suggestion Diabolique, Op. 4, No.4. I learned the first movements of three Piano Concertos: Schumann, Op. 54 in A Minor; Chopin, Op. 11, #1 in E Minor; and Rachmaninoff, Op. 18, #2 in C Minor, with Zinovy playing the orchestral part on a second piano.
Zinovy has a unique ability to spot technical errors almost instantly and show you how to fix them, including devising alternate fingerings to suit your hand until one really works. This is especially true with extremely difficult pieces. He taught me technical “tricks” to help me play Liszt. His sense of style, pedaling, musical phrasing and tone quality is profound and sophisticated. I had never memorized a piano piece until Zinovy taught me how to do it. Simply put, he has transformed my playing.